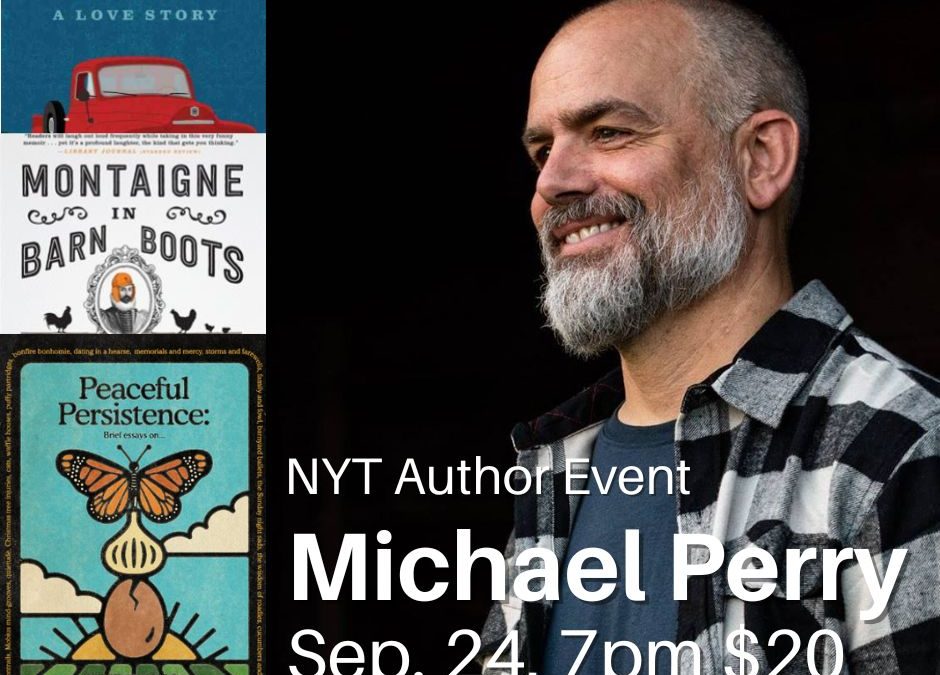 The Colfax Public Library is hosting Michael Perry as a fundraiser for the Elevator Project.

Browse works by Michael Perry available at the library.

Perry’s bestselling memoirs include Population: 485 (subsequently adapted for the stage), Truck: A Love Story, Coop, Visiting Tom, and Montaigne in Barn Boots. Among his other dozen titles are The Scavengers (for young readers), his novel The Jesus Cow, and his two most recent books, Peaceful Persistence and Hunker. Raised on a small Midwestern dairy farm, Perry put himself through nursing school while working on a ranch in Wyoming, then detoured into writing. He lives with his wife and two daughters in rural Wisconsin, where he still makes an occasional call with the local volunteer fire and rescue service. He hosts the nationally-syndicated “Tent Show Radio,” performs widely as a humorist (his live humor albums include Never Stand Behind A Sneezing Cow and The Clodhopper Monologues), tours with his band The Long Beds, and lives online at www.sneezingcow.com.

Perry’s writing assignments have taken him to the top of Mt. Rainier with Iraq War veterans, into the same room as the frozen head of Ted Williams, across the United States with truckers and country music singers, and—once—buck naked into a spray-tan booth. “As a writer,” says Perry, “I find my greatest privilege lies not in telling my story; it lies in being trusted to tell the story of another.”

In the essay collection Off Main Street, Perry wrote of how his nursing education prepared him to become a writer by training him in human assessment, and he credits singer-songwriters like Steve Earle and John Prine and poets like Lucille Clifton and Honorée Fanonne Jeffers with helping him understand that art could have a little dirt on its boots. Above all, he gives credit to his parents, of whom he says, “Anything good is because of them, everything else is simply not their fault.” His mother taught him to read and filled the house with books; his father taught him how to clean calf pens, of which Perry has written, “a childhood spent slinging manure – the metaphorical basis for a writing career.”

Perry has been involved in numerous musical collaborations, composing and performing “Winter Sleeper” with S. Carey and Ben Lester, co-writing “Red Leaf” with Grammy-nominated jazz pianist Geoffrey Keezer, co-writing “Deeper Kind” with Phil Cook, and composing liner notes for the John Prine tribute album “Broken Hearts & Dirty Windows,” (with Bon Iver frontman Justin Vernon) and the Blind Boys of Alabama album “I’ll Find A Way.” Perry also collaborated with Vernon and Flaming Lips lead singer Wayne Coyne on a project that began when Vernon approached Perry and said, “Say, you’re a nurse…” The results were bloody, but then that was the point.

Of all his experiences, Perry says the single most meaningful thing he has ever done is serve 12 years beside his neighbors on the New Auburn Area Fire Department.

If I had to sum up my ‘career’ in one word, it would be gratitude. I get to write and tell stories all around the country, then come home to be with my family and occasionally hang out at the fire hall. It’s a good life and I’m lucky to have it.